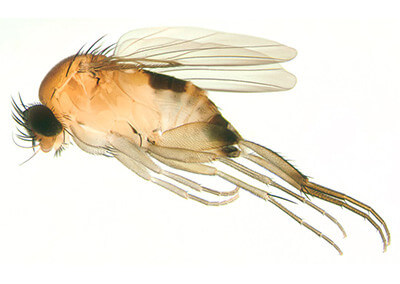 Adult Phorid flies, also called humpbacked or scuttle flies, are relatively small and only reach between .5 to 5.5 mm in length. Color includes a blend of yellow, brown and black. May appear similar to fruit flies but the most distinguishing characteristic is the color of their eyes, fruit flies being noticeably bright red on their head.

Phorid flies target the drain pipes for breeding sites inside residence areas because of the moisture and presence of decaying organic material upon which they feed. It is also around these areas that the females lay their eggs so as to allow the larvae, upon hatching, to sustain them and reach adulthood. Other areas include garbage receptacles, cracks near kitchen equipment and septic system equipment.

Sanitation is the key for preventing the development of a phorid fly population, and this includes constant inspection and sanitation of the likely development sites, especially water pipes. Pouring bleach down a drain on a regular basis will not prevent nor effectively treat an infestation because it does not remove the actual breeding material, the biological film that collects inside the drain, nor the larvae inside that material.

Residual products are not normally necessary. Instead, a drain agent that is capable of breaking apart the biological growth and thereby removing the breeding ground is most preferable. In the meantime, to redress the adult problem, an assortment of fly traps, including insect light traps and glue traps, can prove effective.